This past year was filled with changes and challenges.  Big ones and small ones. Some welcome and some not.  The year started off innocently enough, but I had no idea what was looming on the horizon for Pookie and I – more on that later. 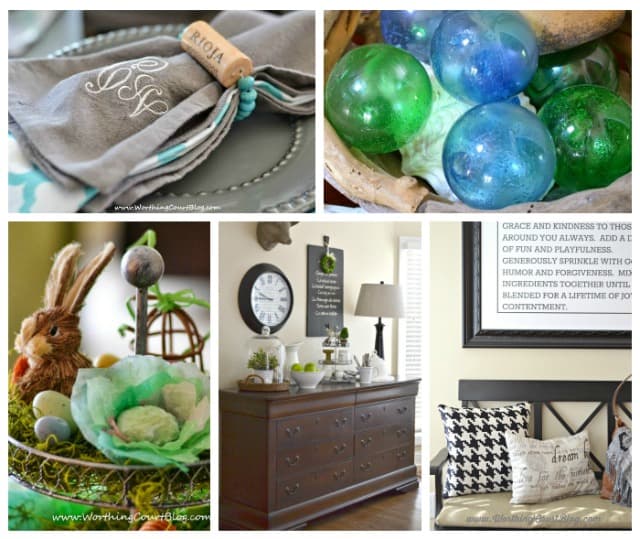 I had been straining at the bit for a long, long time to break away from my green, gold and red decorating that was so popular in the 90’s.  The problem was twofold:  #1 being $$$ and #2 why waste any of those $$$ to make changes to a house that I didn’t love and hoped we wouldn’t be in a more than a couple of years longer.  So for 2014, I decided to see what kind of changes I could make on a very tight budget, all the while keeping an eye toward resale.

In January, I decided to add some farmhouse style to my kitchen.  I didn’t think that painting the cabinets was a good idea (thinking about that resale!) and I wasn’t going to spend thousands to change the granite and backsplash.  But I could change my kitchen table (for less than $300) and I could paint and reupholster my chairs and I could change out accessories too.  So I came up with a farmhouse style mood board and was actually pretty proud of myself for sticking to it as time went by.

A Farmhouse Facelift For My Kitchen 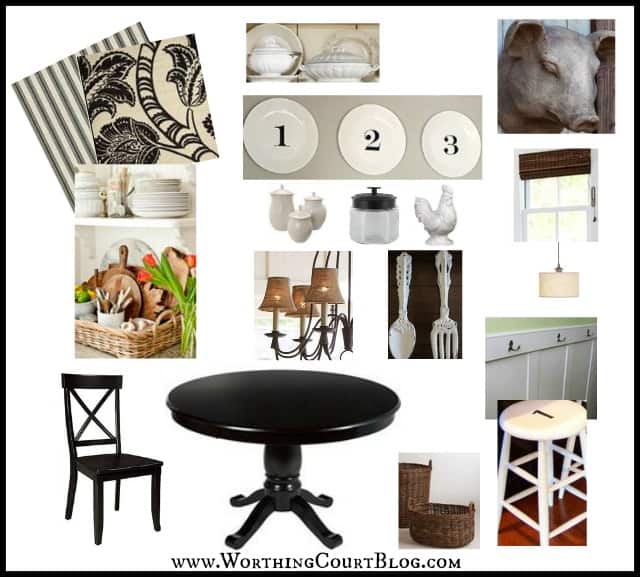 In February between the Valentine’s crafts and tummy warming food like my weeknight chicken pot pie, I managed to replace the window treatment above my kitchen sink with a no-sew faux roman shade and to spend 5 whole minutes turning the can light above the sink into a pendant.  Oh yeah, you can get the tutorial to make your own no-sew faux roman shade HERE. 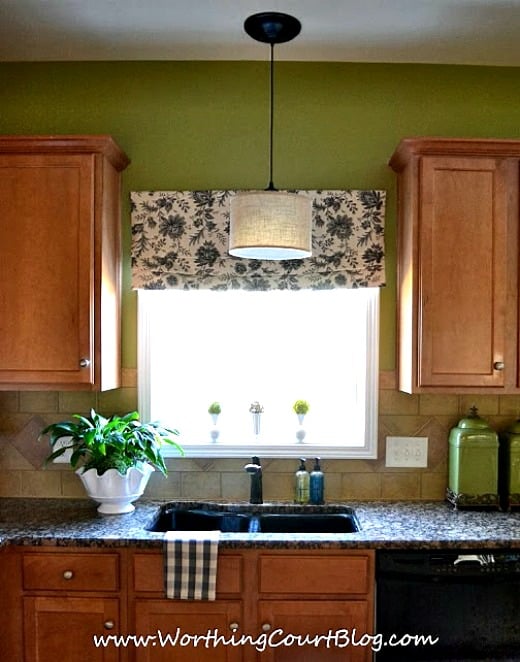 March brought a bad case of spring fever and found me adding spring touches all over the house. 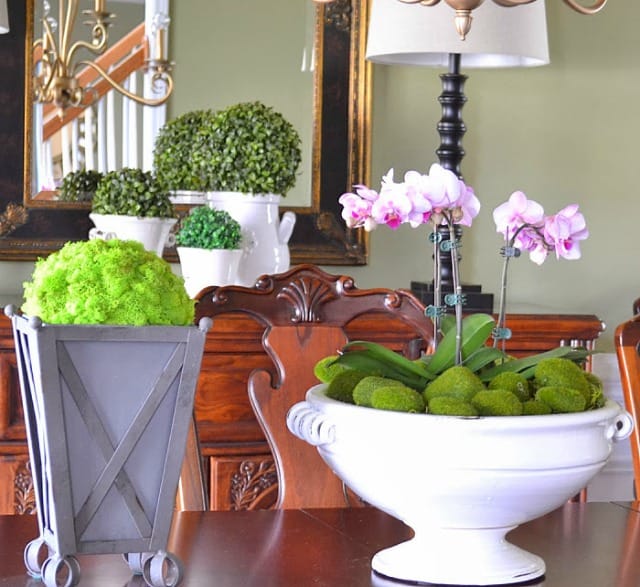 By April I was resigned to staying in our house longer than I wanted to, so I finally gave in and bought some new furniture and started making changes in the family room.  For Easter, I made one of my fave crafts ever! 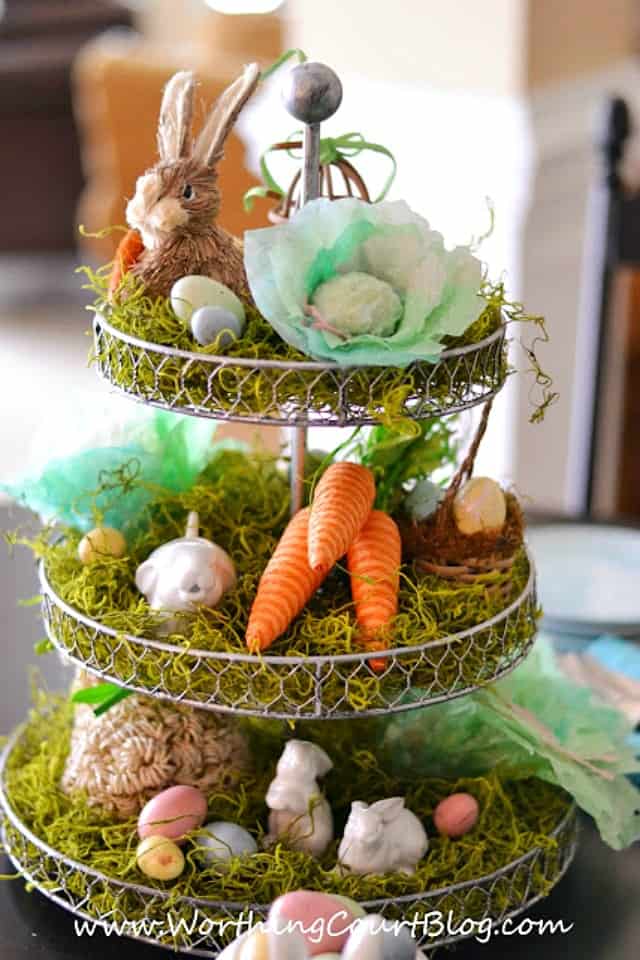 May started off like any other month.  I continued adding some new furniture and accessories to my family room.  But, BAM!  Two weeks later this had happened…

We’re Under Contract For A New {To Us} House! 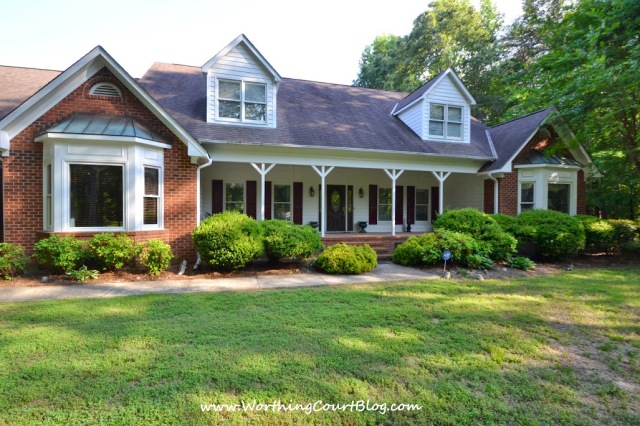 Whoa…slam on the brakes!  Didn’t I just say that it would be at least a couple of more years before we moved???  Well, things just sort of lined up and we found just the right house for us a lot sooner than we expected to.  I was over the moon excited! Y’all this house is SO ME – at least it will be once we’re finished will all of the renovations and updating.

New updates to the original house pretty much stopped in June as we prepped it to go on the market by the end of the month.  But, I did have some projects that I had already completed to share with you.  I updated my a huge piece of art on a dime and gave my mantel and whole new look.  I figured out a cool way to hide the blank and ugly side of my refrigerator as part of my farmhouse kitchen facelift. And I shared an easy, beachy craft too. 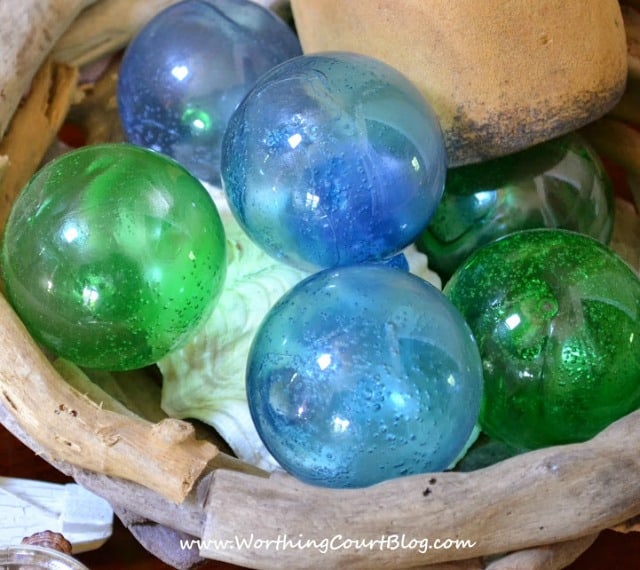 In July, I got together with a friend and showed you how to make napkin rings and bracelets with wine corks.  They turned out so cute!  And even though our house was up for sale, I finally did a reveal for our second guest room. 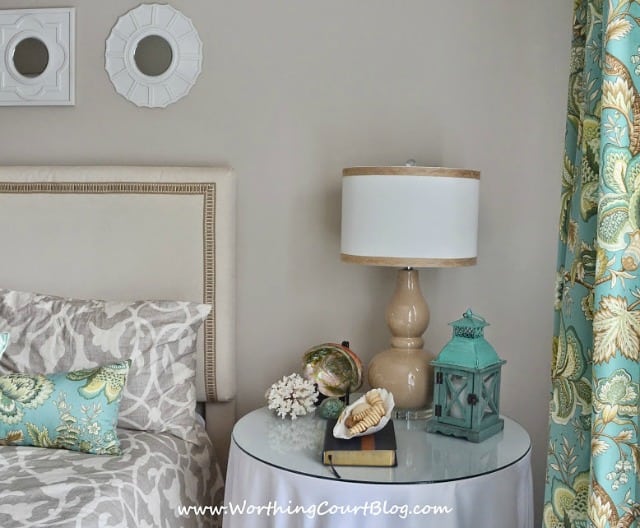 By August, I managed to finally show you my new kitchen table and how I transformed the chairs that I already owned with spray paint and a couple of yards of fabric.  By then we had closed on our new house and our lives were consumed with renovations.  I was spending all day, every day there.  And can I just say, “Wow”.  I considered myself a savvy, knowledgeable person when it came to renovating, but boy have I been surprised.  One day I’ll write a post about what NOT to do when embarking on a home reno. 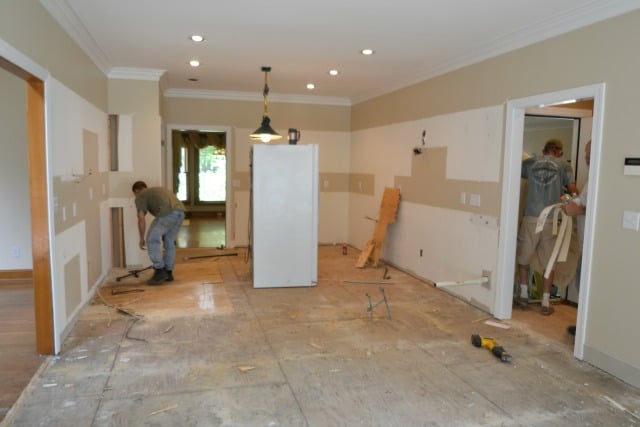 And then the bottom sort of fell out.  Maybe it’s more appropriate to say that the wind was knocked out of our sails.  My dear, sweet mother-in-law, who is 92 years young, had a stroke.  She survived the stroke, but all of a sudden our priorities were rearranged.  Thankfully, our other house had already sold, so the concern over having to make two mortgage payments was off of us.  And thankfully, the renovations were able to continue without missing a beat.  All of that pales in comparison when a family member is struggling though.

We moved into the new house toward the end of September, with no kitchen and no master bath.  It wasn’t too bad, but it isn’t something that I would want to do if I still had children living at home.  My own projects pretty much ground to a halt, but I was able to share the beyond fabulous before and afters of my friend’s remodeled kitchen. 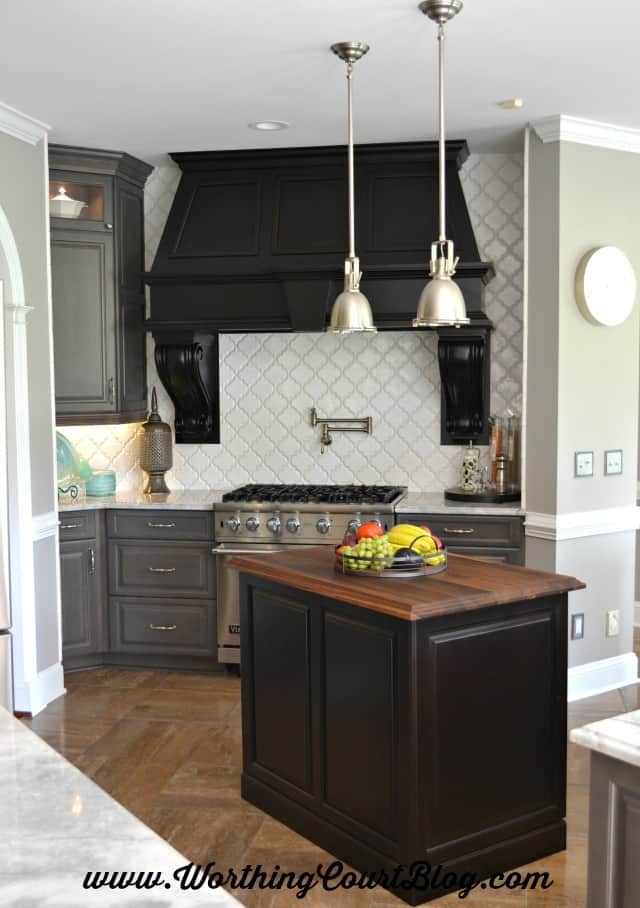 I took you on a tour of a local designer showhouse in October and then shared how the designers got their look on a budget.

Tour Of The Chic Chateau Showhouse 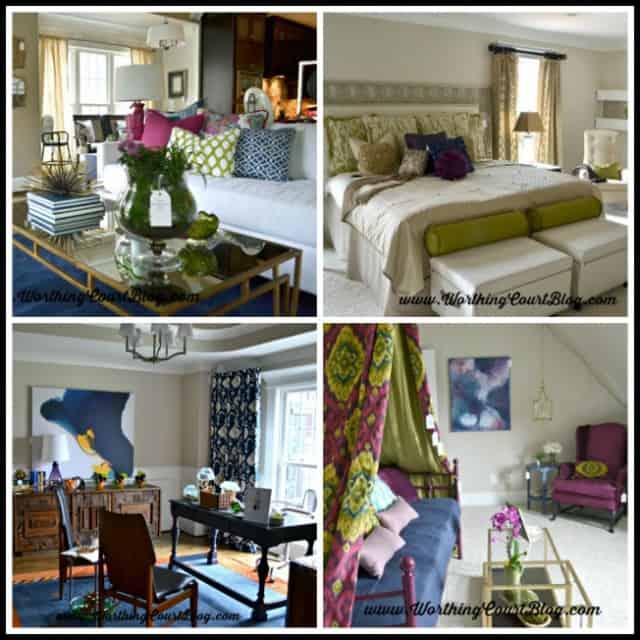 By the middle of November, we had been living in the new house for about six weeks. I hadn’t shown you very much about it because I didn’t figure you’d be interested in looking at a lot of dust and debris.  But, I finally gave you a mini tour of the main floor so that you could get an idea of what was going on.

It Isn’t Pretty {Yet}, But Here’s A Peek At Our New House 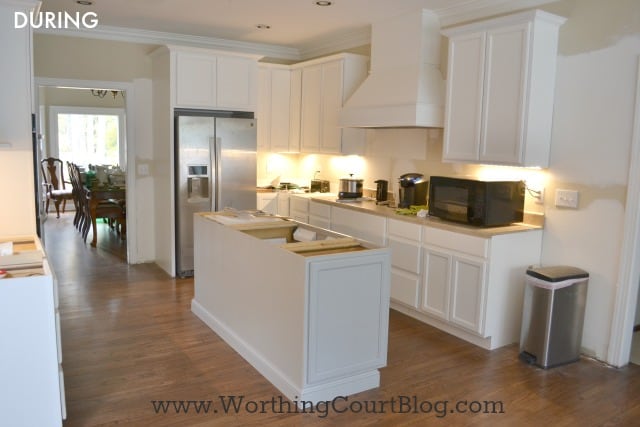 By the time that December rolled around, the major renovations had been completed. There are still a ton of smaller things to complete, but I finally felt like I was in a position to start doing some fun projects here and there.  In my breakfast area, I added a bench and a great free printable that I had enlarged and hung above it.  I wasn’t able to do very much Christmas decorating, but I did manage to put up a rustic Christmas tree and come up with a super easy and affordable, no fuss-no muss Christmas wrap project.  Oh – and I showed you that dressers aren’t just for bedrooms anymore.

A Farmhouse Vignette And A Place To Store Linens 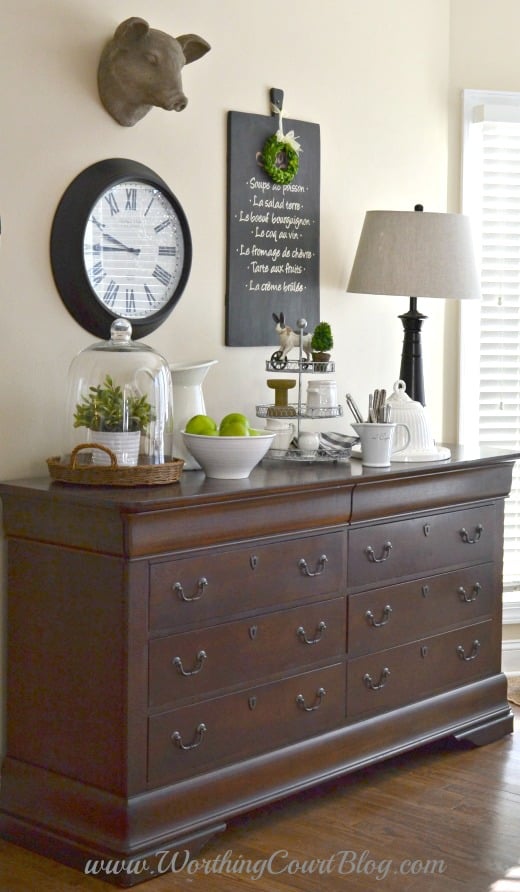 That’s my year in a nutshell.  A year filled with changes and challenges and some sadness too.  The health of my mother-in-law continues to decline.  As hard as it will be to say goodbye to her, we have faith that God is still in control and remind ourselves that her suffering will be at an end and we will see her in heaven again one day.

I’m eagerly awaiting 2015 and all of the hope that a new year brings with it.

I’m eternally thankful for each of you and your continued friendship.  Have a safe and Happy New Year!

Gallery image with caption: Style Showcase 15 | Valentine’s Crafts, Tables And A Tour Of The HGTV Showhouse!

Who's ready for spring??? Me! Looking back at pic

Whether you are new to my Instagram journey or hav

I'm a budget decorator and I cannot lie. 😁 I sp

When I was just beginning my house keeping and dec

Are you tired of seeing pics of my master bedroom?

Happy day of love! ❤️ What are you grateful fo