Take a video tour of a modern farmhouse condo filled with beach house decorating ideas. If you love coastal decor, without going overboard, this tour is for you! 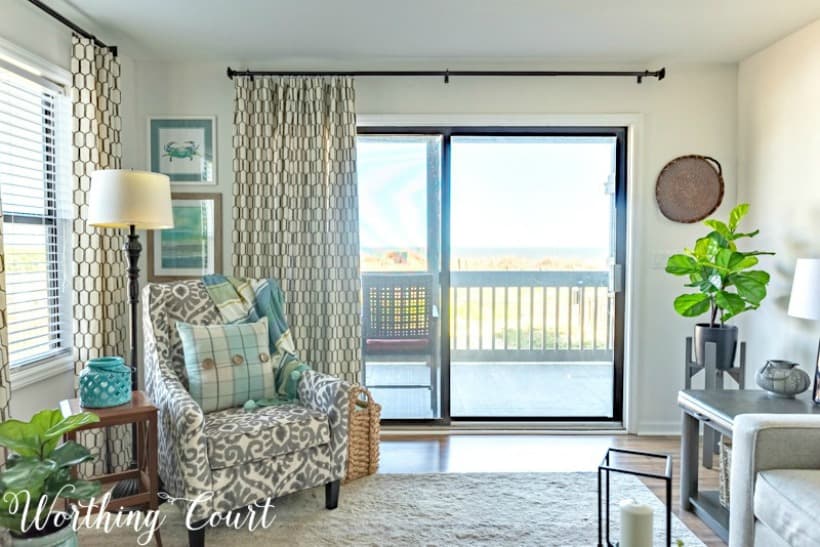 It’s hard to believe, but we’ve officially owned our getaway at the beach for a year now.  It was a rather dated and worn place when we first purchased it and we’ve put soooo much work into its makeover!  It’s truly our happy place and where we go to unwind and to eat seafood.  😀

We’re still finishing up the makeover of the bedrooms and bathrooms (see my plans for the master bedroom HERE), but I’ve shared lots of individual projects of the other rooms that we’ve completed so far – the living room, kitchen and dining room.  So I thought it would fun to do a video tour of those main rooms because some things just don’t come across as well in still photos.  The video is a fun way to take a closer look at things, to better show you how all three of the spaces tie together and to talk about my resources.

The video is located down below, but before we get to the tour, let me show you a before and after of the spaces that we’ll be taking a look at.  These will serve as a refresher if you’re a long time Worthing Court reader and will give those of you reading for the first time a better idea of how far this condo has come.  Click on the name of the room above the photo to take a tour of the entire space.

In addition to using it themselves, the previous owners of this condo used it as a rental and it showed.  Every single thing in the living room was tired, worn and dated.  The carpet was icky-sticky, the furniture was gross and saggy and everything felt generally dusty and grimy.

We donated nearly all of the furniture, repainted the walls (Sherwin Williams Snowbound throughout the entire condo), replaced the ceiling fan and replaced the carpet with laminate flooring and an area rug.

After the major changes were made it was on to the fun part – making the space pretty!  In came new furniture, diy draperies and fun accessories.  All along, I’ve been working toward a modern farmhouse look with just a nod to the fact that this place is located oceanfront. No tacky beach tchotchkes allowed.  😀  In the video, I’ll explain how I accomplished capturing a coastal feel without going overboard. 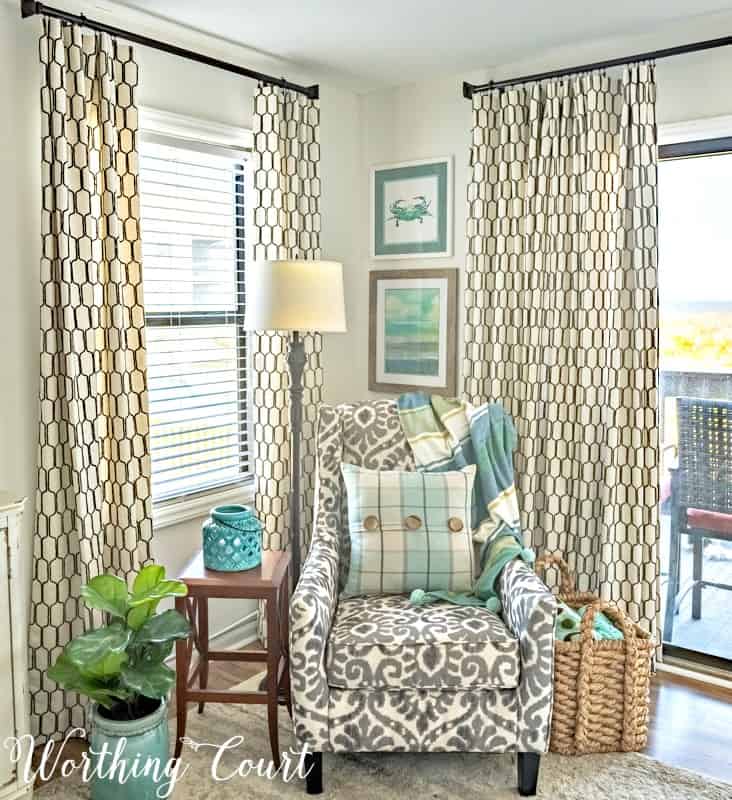 The dining room in the condo does double duty.  In addition to being the place where we eat, it also serves as the entry area into the condo.  It was a bit of a dilemma to figure out how to treat a room with two totally different functions as one, but you can see how I accomplished that in the video.

Two of the walls were covered with a wallpaper mural, the flooring was ceramic tile, the table was way too small and I’m not a fan of having a ceiling fan above a dining table.  Who wants to eat cold food??? 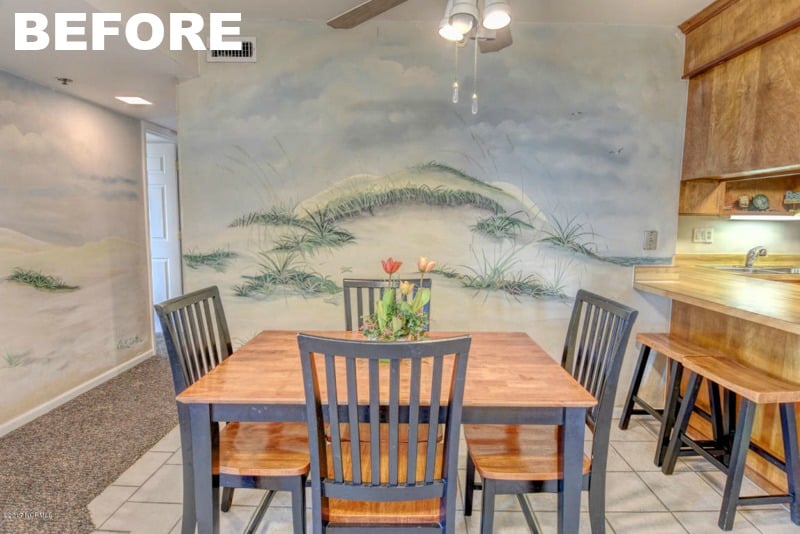 Some of the tiles were broken, so out it came, along with the carpeting that ran along the edge, and in went laminate flooring.  We removed the wallpaper murals and added board and batten to one wall, which is painted Sherwin Williams Software.  The back of the peninsula was painted the same color as the board and batten wall to help tie it all together.

A large’ish chandelier, which serves as the main light, makes quite a statement in the space.  I kept the original chairs and barstools and painted them with my favorite spray paint, but we replaced the table with a larger one and added two wicker chairs to each end of the table. A beautiful area rug, the addition of some artwork and cool mirror and another piece of furniture completed the space. 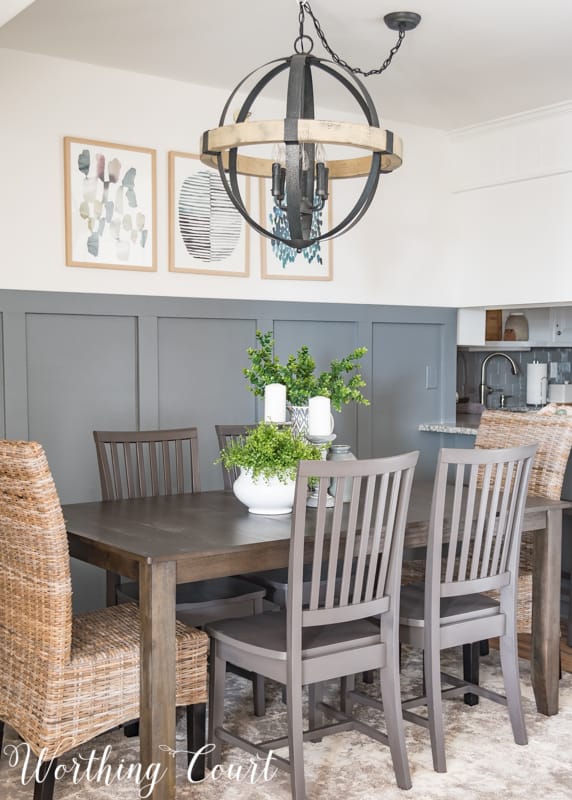 The kitchen is a small galley kitchen and the before photo pretty much speaks for itself – greasy and grimy dark cabinets, worn fake butcher block laminate counters and older mismatched appliances.  At least there wasn’t an ugly backsplash that we had to remove. 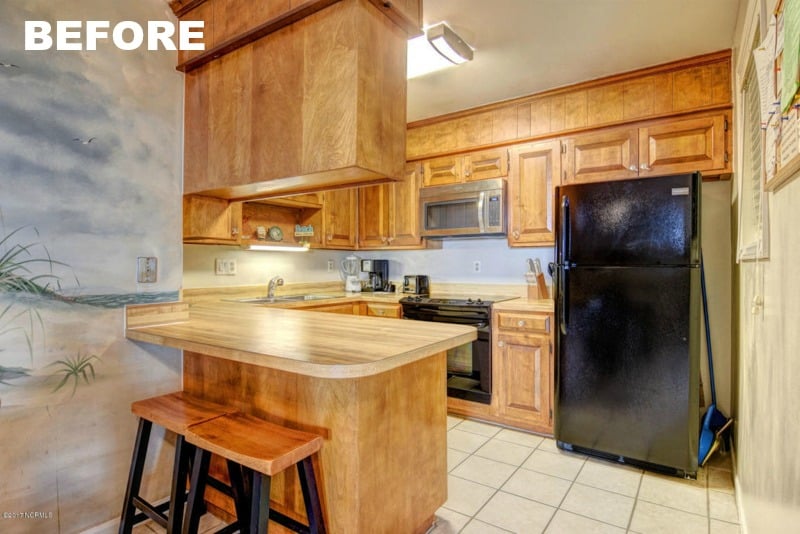 This is the one room in the condo where we spent a significant amount of money, but by careful shopping we were able to keep the cost down.  In the video you’ll get a closer look at other details that we added and a couple of projects that are yet to be completed.

The cabinets were painted, instead being replaced, the granite counters are made from remnant pieces and the appliances are all just basic models.  Painting the cabinets white (Sherwin Williams Extra White) totally transformed the space! 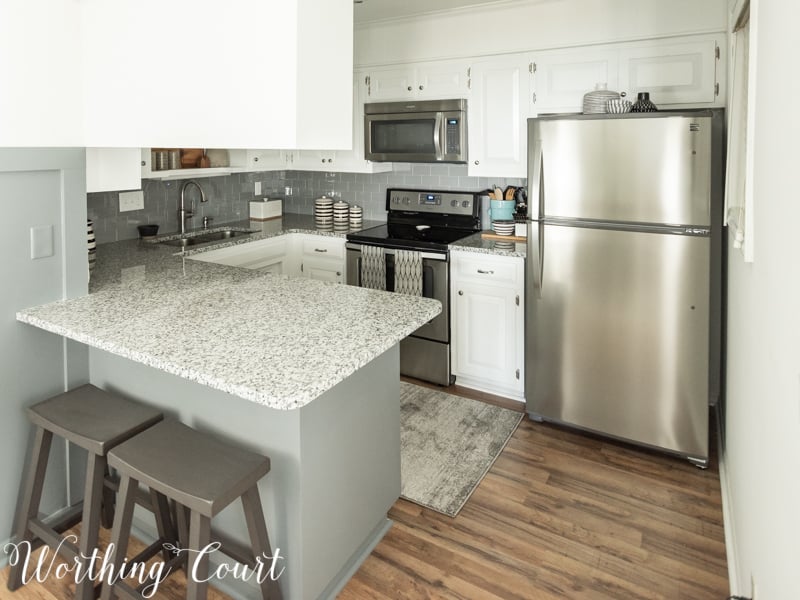 Now that you’ve taken a look at the individual spaces, you’ll see how they all flow together in this video.  Enjoy and  thank you for stopping by!