We’ve been doing tons of small projects at our new-to-us house, but by far the most major renovations have been to the kitchen and master bath.  Our kitchen was completely ripped out and is almost finished {yay!}.  You can see my post about the most recent updates to it HERE.   Much of the master bath was ripped out too, but not as much as the kitchen.  It feels so good to be at the point that I can finally get to the fun part! 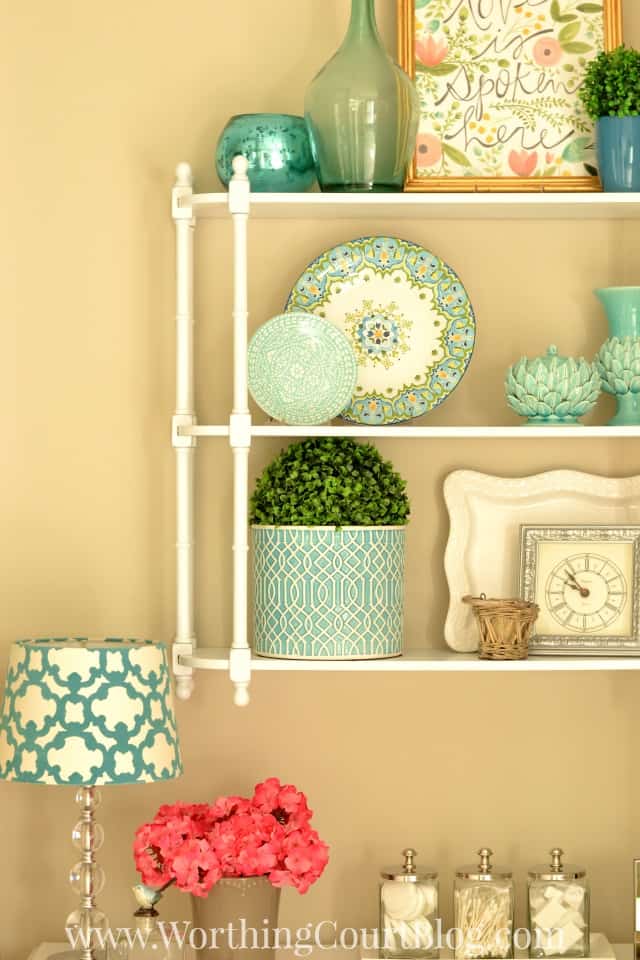 Have you seen the before photos of our new-to-us house?  If you have, you may remember that we were not enamored with the master bath!  Before we got our hands on it, one side of the bathroom was filled with a shower, ginormous step-up spa tub and the potty.  Yeah – not really the look I was going for.

We are not bathtub people, but we are people who enjoy a large shower that includes a bench.  I also prefer a closed in privy.  So we ripped out the tub, enlarged the shower and added a room for the privy.  All of the plumbing stayed in the same location, which was a big money saver.  You can see that a nook was created when the tub was removed and the privy room was built.  Those are the old vanity mirrors leaning against the wall in the nook. 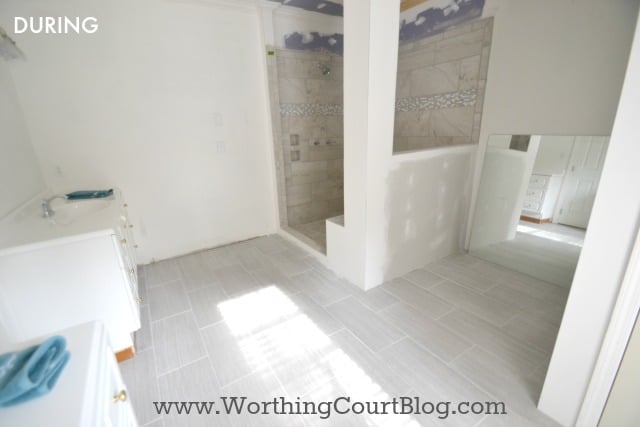 My original plan was to add an armoire in the nook that would contain all of our linens and bathroom necessities.  But, I quickly realized that a large piece of furniture would be too much for the space.  Plus the depth of it would have blocked some of the glass shower wall on the left side.  So I switched to plan B, which was to add a dressing/makeup table in that area.  I found just the right piece after what turned out to be a very frustrating search.

This is what that same area looks like today.  {You might notice that it looks like there’s a gap in the shoe mold on the left side.  We were waiting for some extra tile work to be done, so Pookie just needs to get in there and nail it down.} 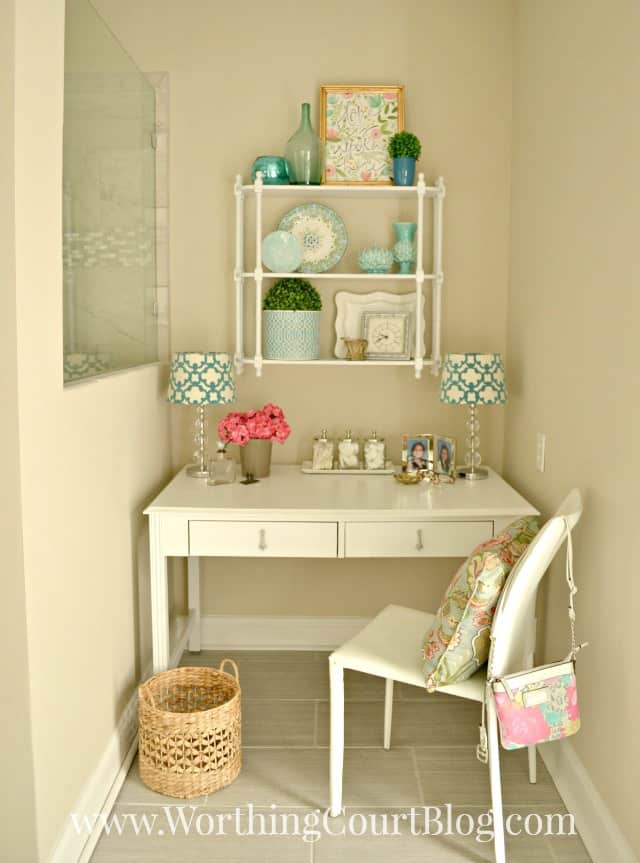 I didn’t sand the desk at all, but I did wipe it down with mineral spirits to remove any oil and furniture polish build up.  I painted it with a coat of Zinsser primer and two coats of white oil based gloss paint.  Don’t be afraid to use oil based paint.  I believe it gives a harder/stronger finish than latex and the oil based paints of today don’t have nearly as strong of an odor as oil paint from the past. 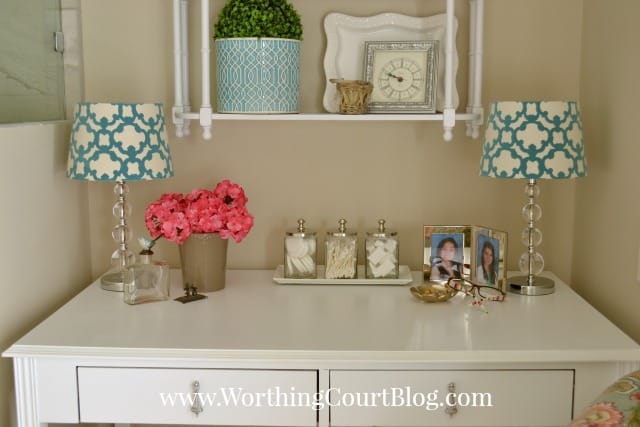 The dressing table is large enough to allow me space for a few sentimental and decorative items too. 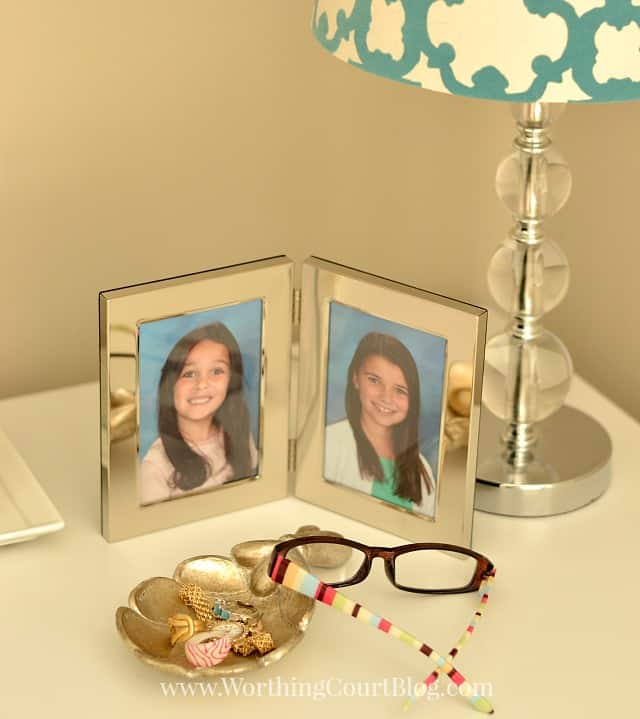 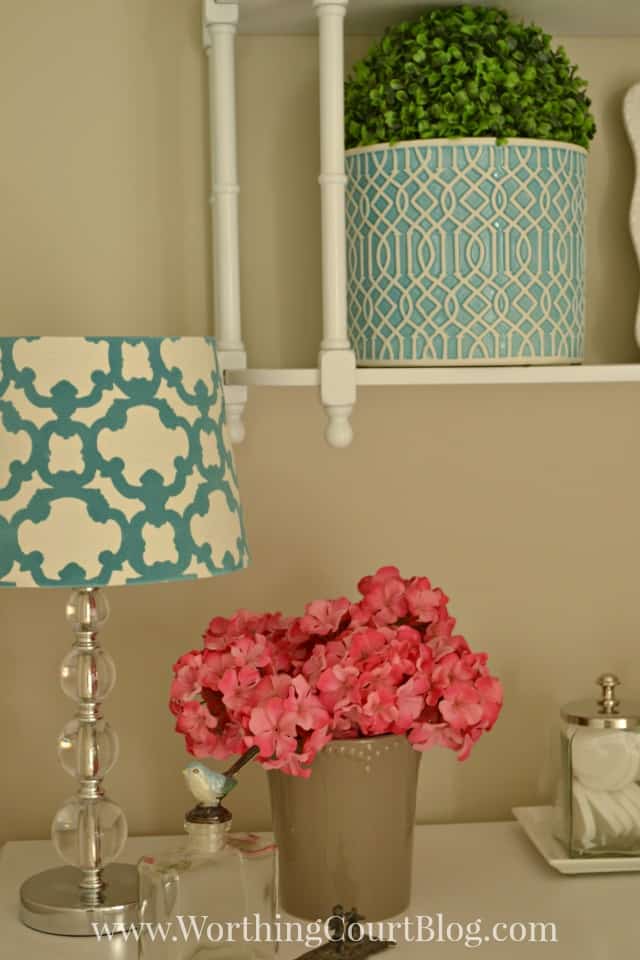 The next challenge was to figure out what to put above the dressing table.  I started out searching for some art prints, but then remembered a set of old, dark brown shelves that I purchased from Bombay back when they had their retail stores.  As with the old desk, all it needed was a coat of primer and a couple of coats of paint. 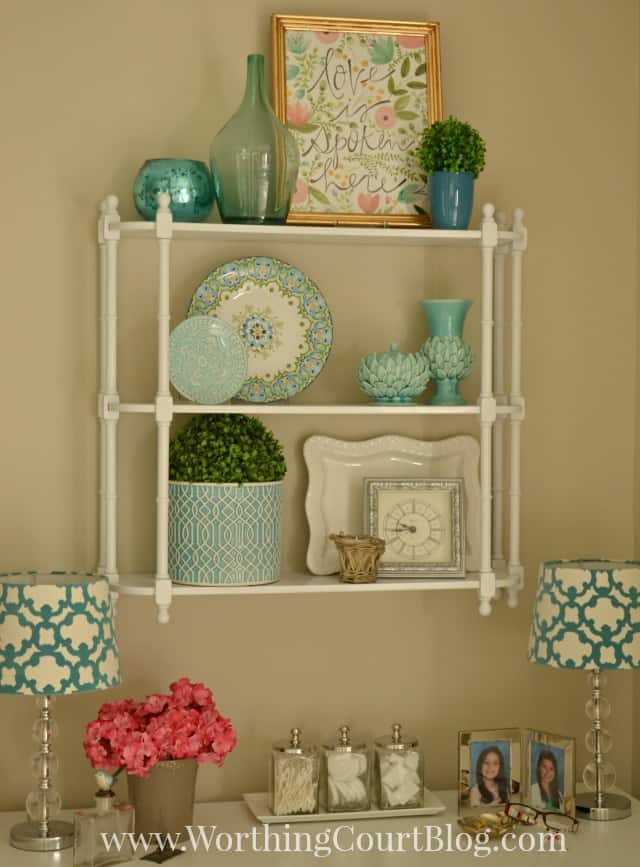 The nice thing is that I was able to pull all of my decorations from my stash and didn’t have to spend a dime dressing it all up! 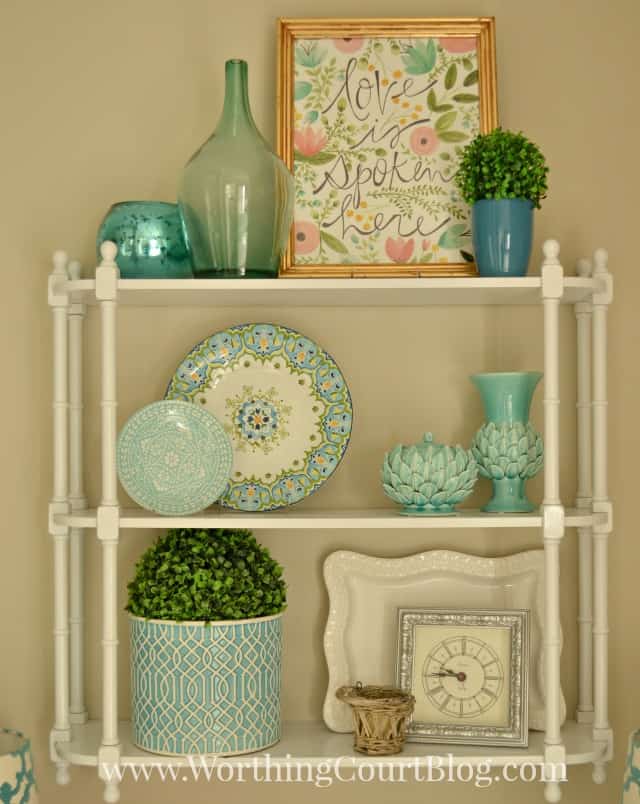 Now onto the next project!

Click HERE to see the awesome places where I party!

Gallery image with caption: How To Make Driftwood Using Paint And Stain – An Easy 4 Step Formula

Gallery image with caption: My Refreshed Coffee Bar And The Best Coffee Maker Ever!

Gallery image with caption: 7 Things You Should Do When You Decorate Your Home

Gallery image with caption: How To Paint Furniture For A Farmhouse, French Country Or Shabby Chic Look

Who's ready for spring??? Me! Looking back at pic

Whether you are new to my Instagram journey or hav

I'm a budget decorator and I cannot lie. 😁 I sp

When I was just beginning my house keeping and dec

Are you tired of seeing pics of my master bedroom?

Happy day of love! ❤️ What are you grateful fo