I’ve had several of you ask to see pictures of Ms. JB’s new (to her) house ever since I dedicated my post, How to Make the Most Out of Your Small Closet, to her back in March. 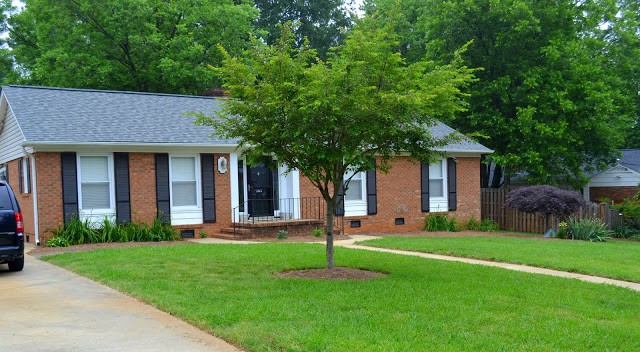 Ms. JB sweetly agreed to let me give you a tour now, even though not quite all of the unpacking has been completed and there are still scores of projects on her to-do list.
Ms. JB knew from the beginning that she wanted a 1960’s – 1970’s, brick ranch.  That’s what she set her sights on and that’s what she got!  I’m so proud of her for sticking to her guns until she found just the right one.
Let me show you the floor plan before we start on the tour.  This is a very rough rendition and is not to scale.

I guess we’ll start the tour in the most logical place, which is the entry.  This picture was taken from the living room looking back toward the entry.  The little table on the left is actually meant to house a sewing machine.  It was a Craigslist score that Ms. JB plans to paint. 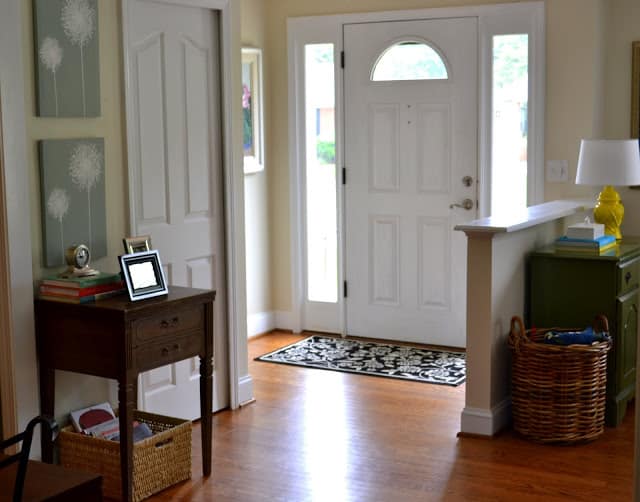 The entry is a small space so there isn’t room for any furniture.  Ms. JB added a painting that is one of many that our family has that was painted by my Auntie Syl.  You can see where she’s started testing different paint samples. 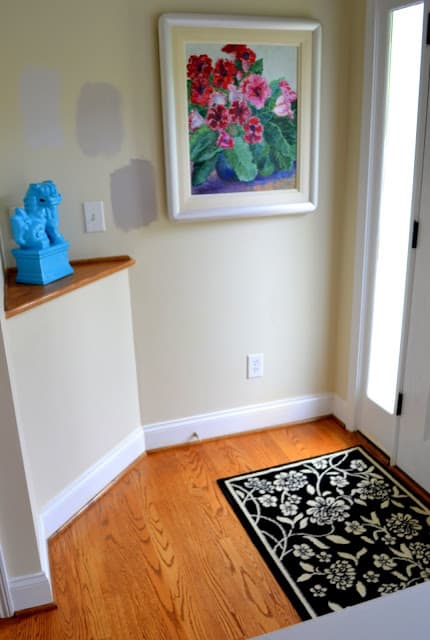 Did you see the foo dog?  Ms. JB scored it on Craigslist.  He’s a large fella and was an ugly, blotchy red color to start with. 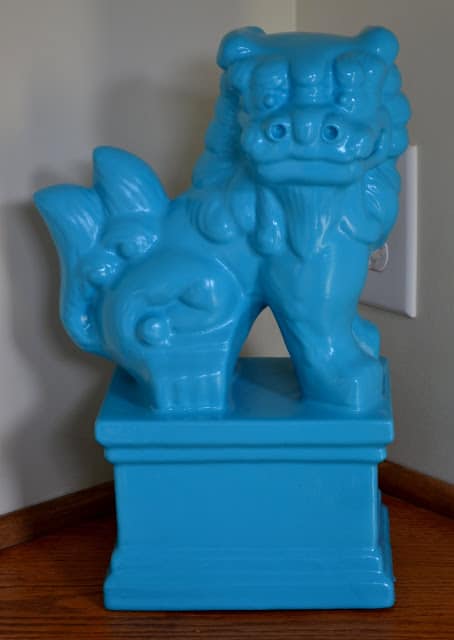 The living room is a bright space thanks to all of the windows in the room.  Ms. JB plans to replace the blinds with bamboo shades and add drapery panels.

Eventually, she wants to add built-in’s around the window on the wall at the far end of the room. 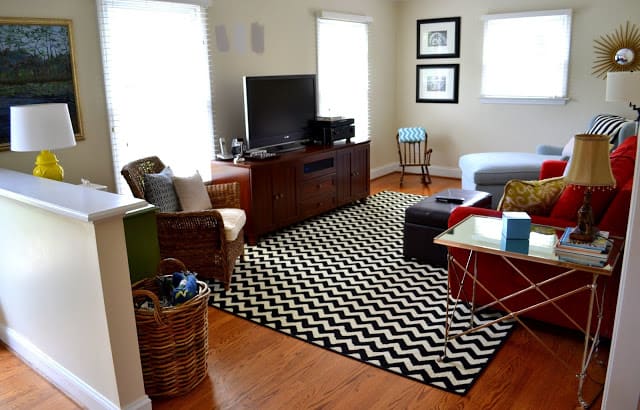 The 8×10 chevron rug was purchased for an awesome price on Overstock.com.

My girl loves color, so she has no problem working with the red couch from her prior home.  It will be replaced one day, but for now it’s just fine.

There are other small pops of red around the house that help to tie it in.  That little elephant lamp will be adorable once he’s painted and given an updated shade.  She still needs art for above the couch and you can see more test paint swatches.  By the way, none of these made the cut.

Ms. JB had me busy making a few pillows for her.  We found the blue pillow for a song at Christmas Tree Shops, of all places.  The two chartreuse ones are made from napkins found at World Market and the one on the chaise is made from a drop cloth.  Ms. JB is going to use her Silhouette (that she won!) to create an image to transfer onto the pillow. 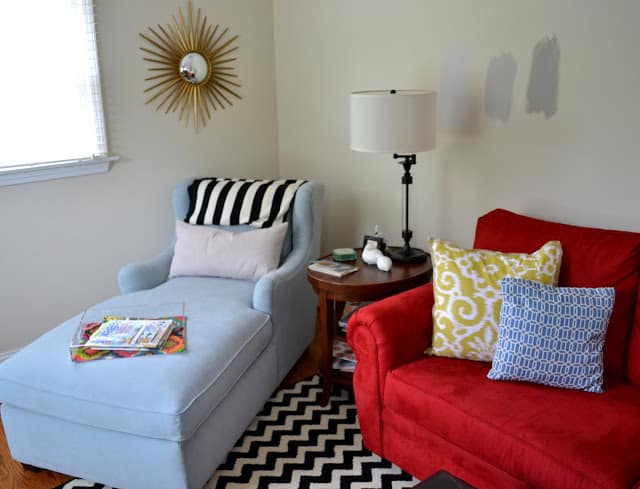 Looking toward the other end of the room.  The tv console will either get a coat of paint (maybe charcoal gray) or will be replaced one day. 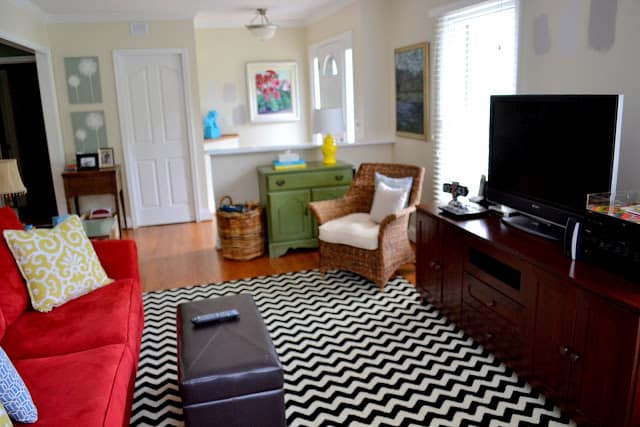 The wicker chair was a fabulous score from a local thrift shop and the bamboo design lamp was a Goodwill score that she painted a chartreusey yellow.

The green chest is vintage 60’s and will eventually be painted.  That’s another one of my aunt’s paintings hanging above the chair.  I tried my best to talk her out of that basket, but she wouldn’t budge! 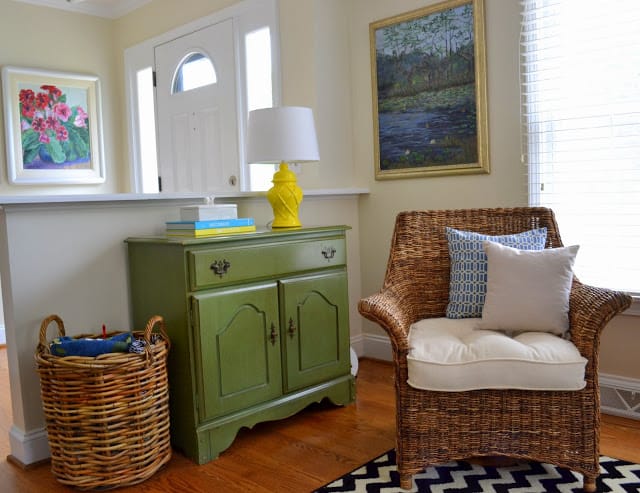 From the front door, you can see straight into the dining area and into the sunroom beyond.  The lighter blotches on the wall are more test paint swatches. 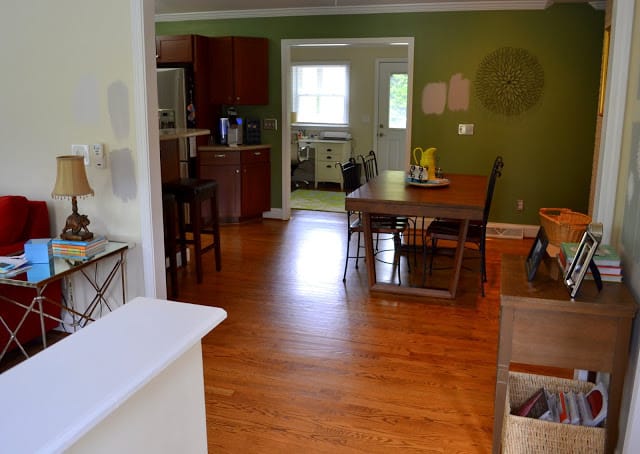 The table is a score from our recent shopping excursion to High Point Liquidators.
For now, Ms. JB is using the chairs that went with her previous table.  She’s still not sure about whether to keep them, replace them or paint them.

There’s another one of my aunt’s paintings above the fireplace.  Eventually, there will be a rug under the table. 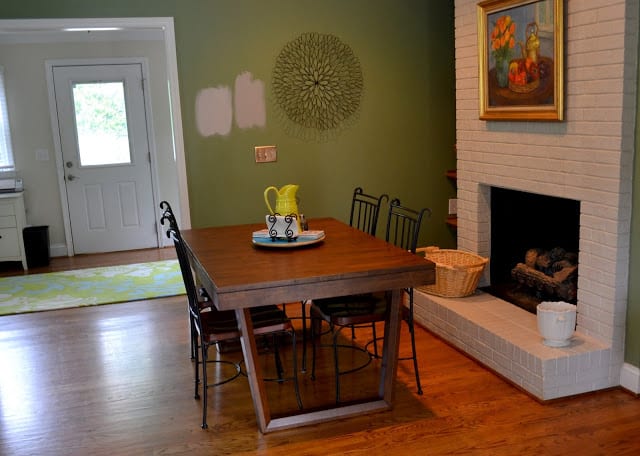 The former owner of this house was a contractor who made some major renovations to the house.  We think there used to be a den where the fireplace is.  Ms. JB will be adding a fireplace screen and wants to add a mantle too.

She’s still undecided about exactly how to treat the little shelf nook, but I think she’s done a great job of styling it for now.  The door on the right is the hallway that leads to the bedrooms. 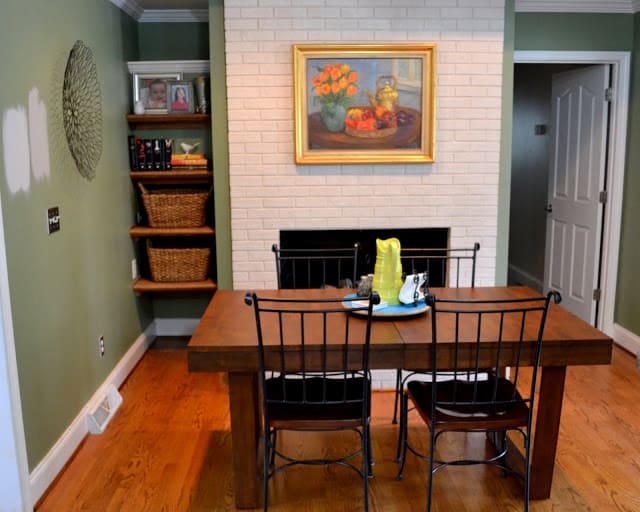 The enlarged and totally remodeled kitchen was a major reason that Ms. JB chose this house.  Kitchens really do sell houses! 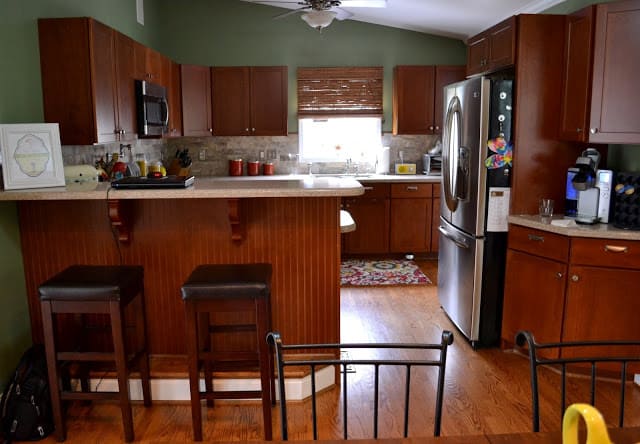 The bar (she’s on the hunt for new stools), new cabinetry, marble backsplash, Silestone counters and cool features like the pot filler all combined together to make it pretty irresistible! 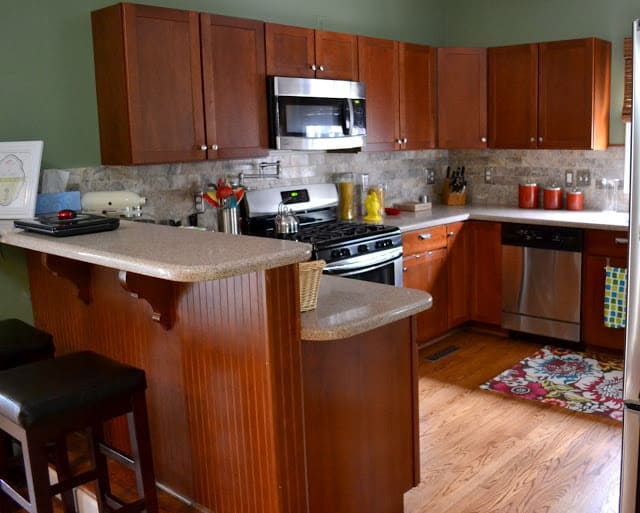 Interesting tidbit – the Kitchen Aide mixer that you see to the left of the stove was purchased by my mother (who was a wonderful baker) back in the 80’s.  These vintage babies are well made and worth quite a few $$$ today.  I had someone from a local gourmet grocery store offer me $600 for it, sight unseen! 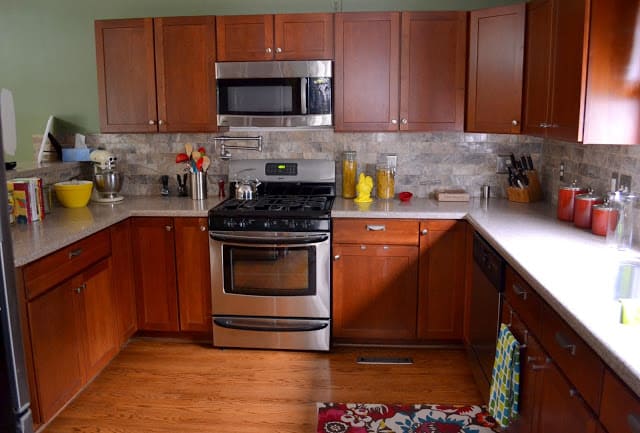 I love this rug that does a great job of pulling all of the colors in her house together.  It came from Urban Outfitters. 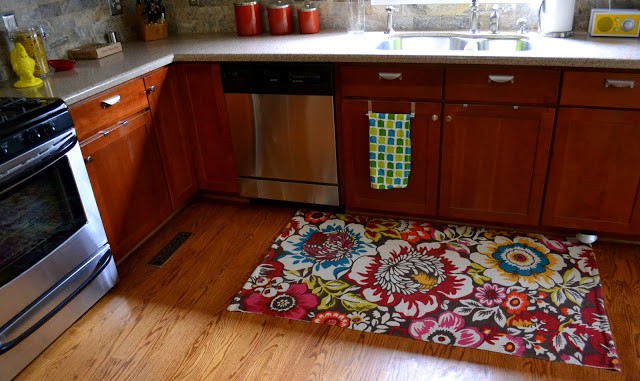 A greenhouse window was added above the kitchen sink during the remodel. 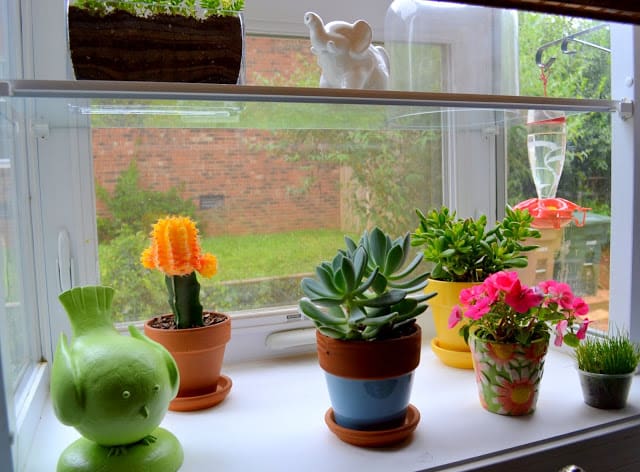 The refrigerator is located adjacent to the stove and was included in the sell of the house.  Here’s a peek into the laundry room too. 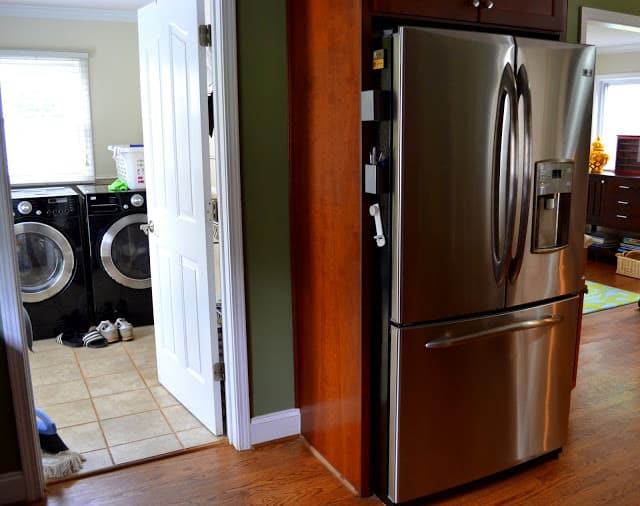 There is a sunroom that opens right off of the kitchen/dining area. 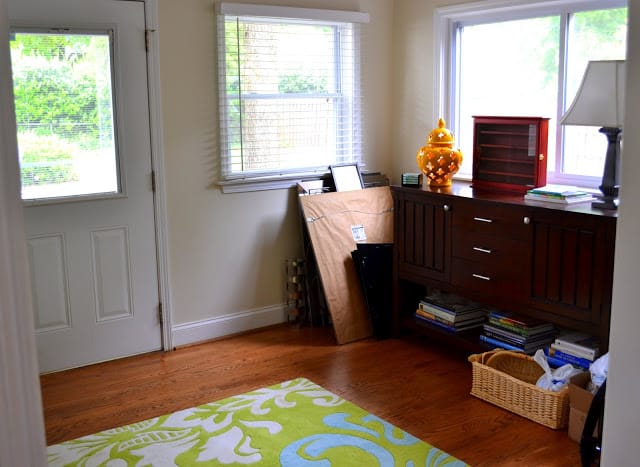 Right now it’s a mish-mash of hodpodge stuff, but Ms. JB has plans to turn it into an office space with built-ins on one end and probably a sitting area on the other end.

The desk and chair are more scores from High Point Liquidators, though not on our recent shopping excursion.  The bookcases were found for a song on Craigslist and are like brand new. 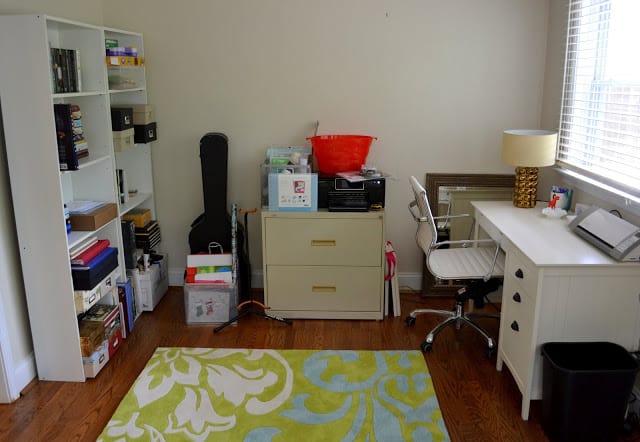 This pretty rug is another score from our shopping trip to High Point liquidators. 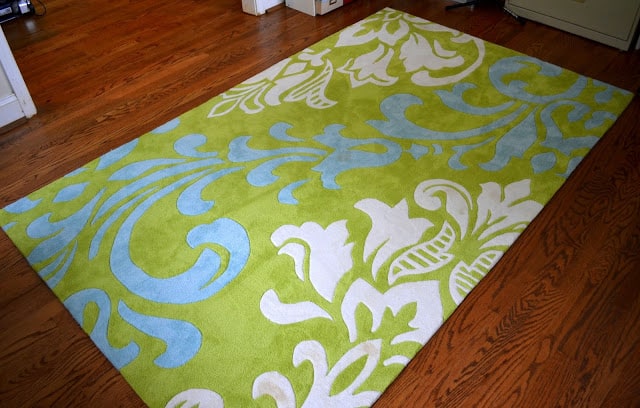 Hope you enjoyed this little tour.  Next time I’ll share the rest of the house with you.

Gallery image with caption: Principles Of Interior Design Week 3 | The Principle Of Contrast

Gallery image with caption: 5 Favorite High Impact DIY Projects For When You Have A Small Budget

Gallery image with caption: Principles Of Interior Design Week 2 | The Principle Of Emphasis And Focus