I am sharing beautiful before and after pictures of my kitchen remodel in a gorgeous farmhouse kitchen style! 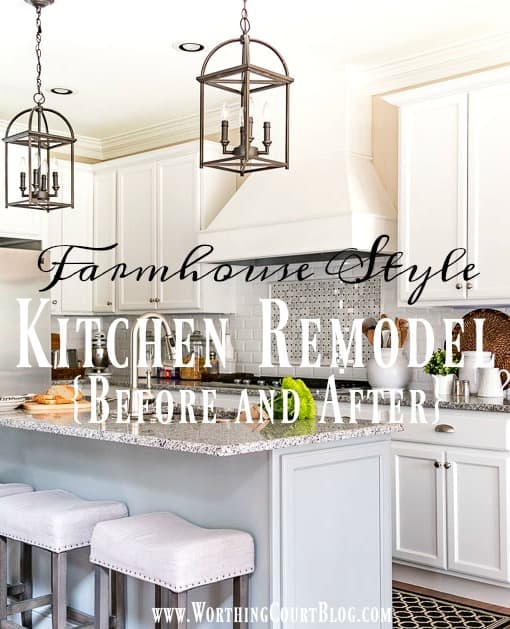 When we first looked at our house (yikes – has it been two years ago already?!?!), I was super psyched that it had a white kitchen!  The layout wasn’t perfect, but I thought that we could get away with making just a few changes to the existing kitchen that would hold down the cost and would still give me the elegant white farmhouse kitchen of my dreams.  Sadly, it didn’t work out that way.

UPDATE: Not every remodel goes according to plan or turns out the way that you wanted it to!  Click HERE to read all about the good and the bad decisions that we made.

I knew that we were going to replace the kitchen flooring, but I had hoped that we could keep the original cabinets and add small ones above them (9′ ceilings). Then replace the kitchen appliances, replace the laminate counters with granite, replace the island with a larger one and replace the billiard table light fixture.  For the sake of saving money, I was even willing to keep the same location for the wall oven and cooktop and to leave the peninsula where it was. 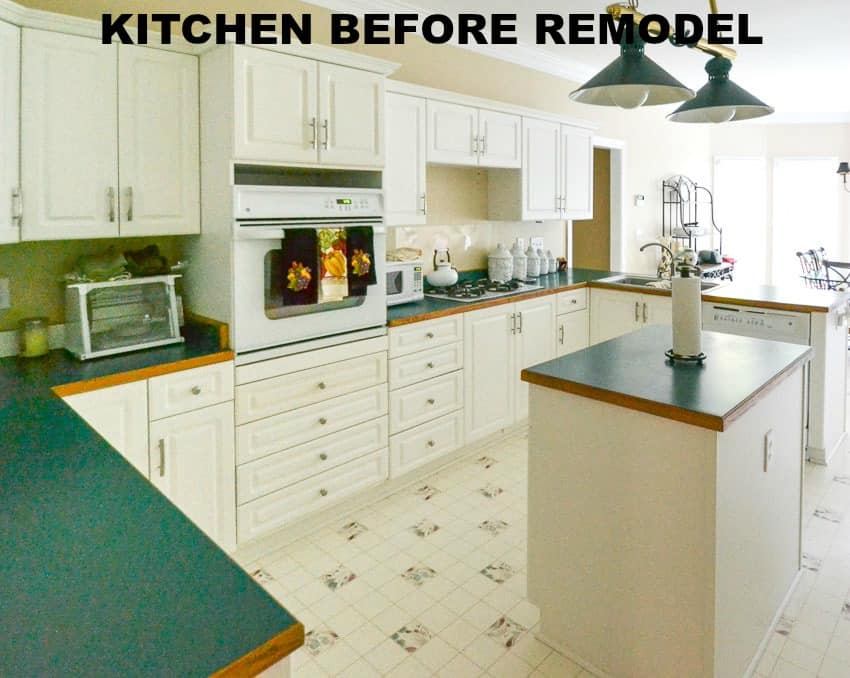 On the opposite side of the kitchen, I was happy with the pantry (except that it was disgustingly filthy!).  I was going to keep the fridge location the same and set up my coffee bar in the little nook to the right of the fridge.  I was undecided about what to do with the desk. 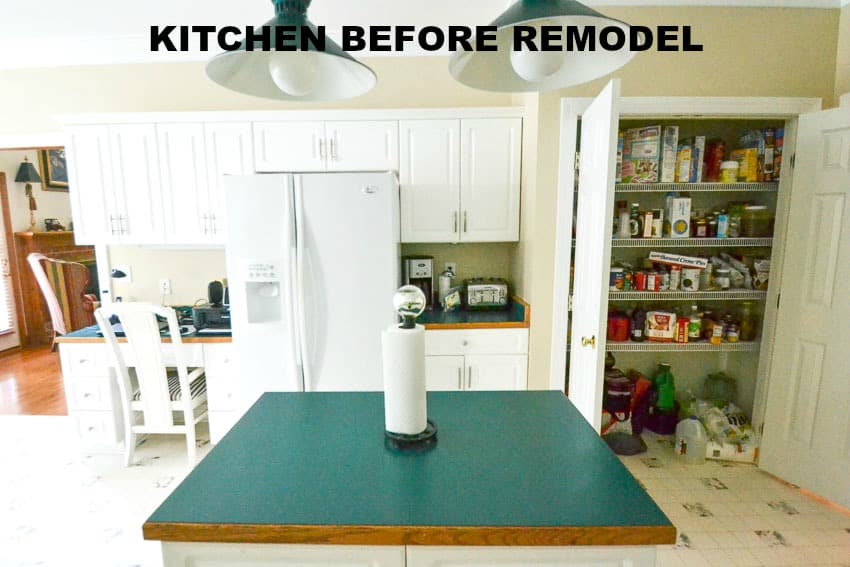 Upon further inspection though, we found that while the cabinet boxes themselves were in good condition, the Thermafoil, that they were covered with, had started to come loose in several places.  I wasn’t about to spend the $$$$ to replace the counters with granite, or some other costly material, when we just didn’t know how long the current kitchen cabinets would last.  In addition, we discovered that the cabinet above the wall oven looked a little scorched.  Not good.

Sooo….after much research about the longevity and overall quality of twenty year old Thermafoil, this is what happened!  Pookie and my daughter’s fiance had all of the original counters and cabinets out in a couple of hours or so.  Don’t worry, we were able to reuse several of the cabinets in the laundry room remodel and the rest of them were given to someone who was redoing their basement kitchen. 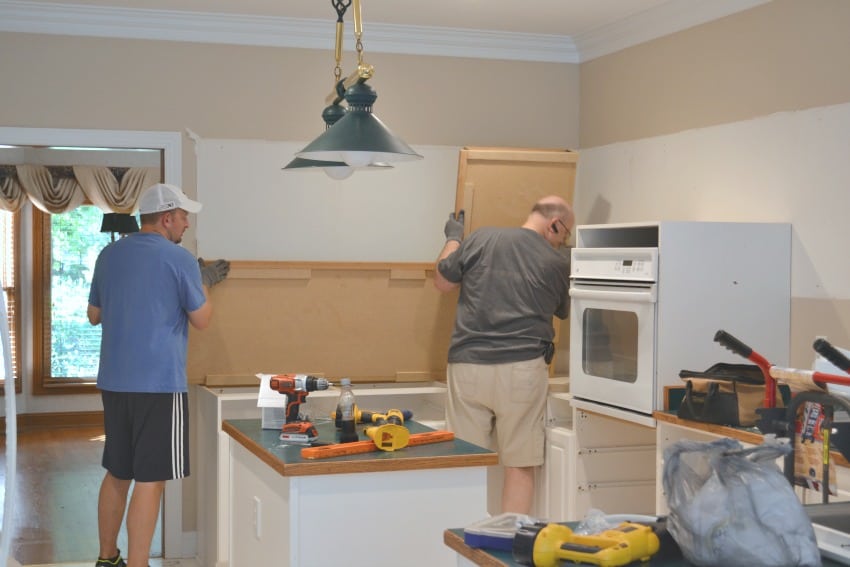 Then the job was turned over to our crew who removed the old and dated linoleum and sub floor.  I won’t bore you with the details, but removing the old sub floor turned out to be one of the most difficult demo jobs in the whole house. 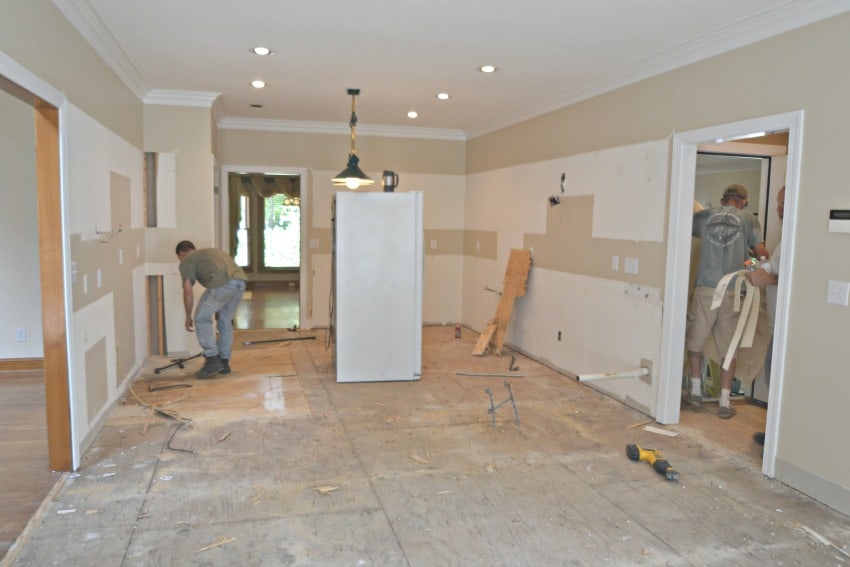 Ever so s-l-o-w-l-y things started to come back together.  First came the hardwood floors, which had to be feathered into the adjoining family room and then stained and sealed with poly. 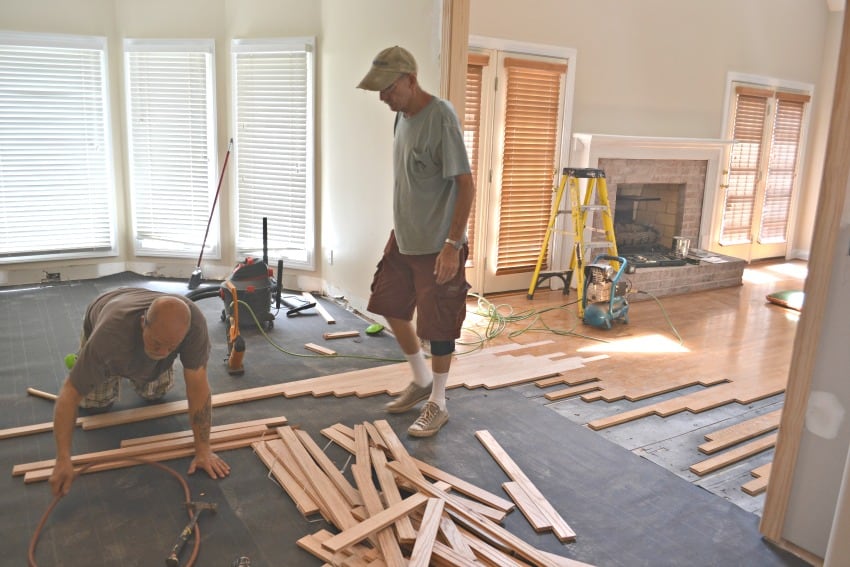 And finally, the new cabinets and kitchen appliances.  Then began the long wait for counters and a backsplash.  Oh, I was so impatient!  We had moved in at this point and were using an old piece of laminate, that we happened to have, as a temporary counter on one side of the kitchen.  We put an old microwave there and used the ovens for cooking more frozen meals than I care to remember.  All of the dish washing took place in one of our bathrooms.  Fun times.

After many, many weeks our farmhouse kitchen style was finished and here she is today! 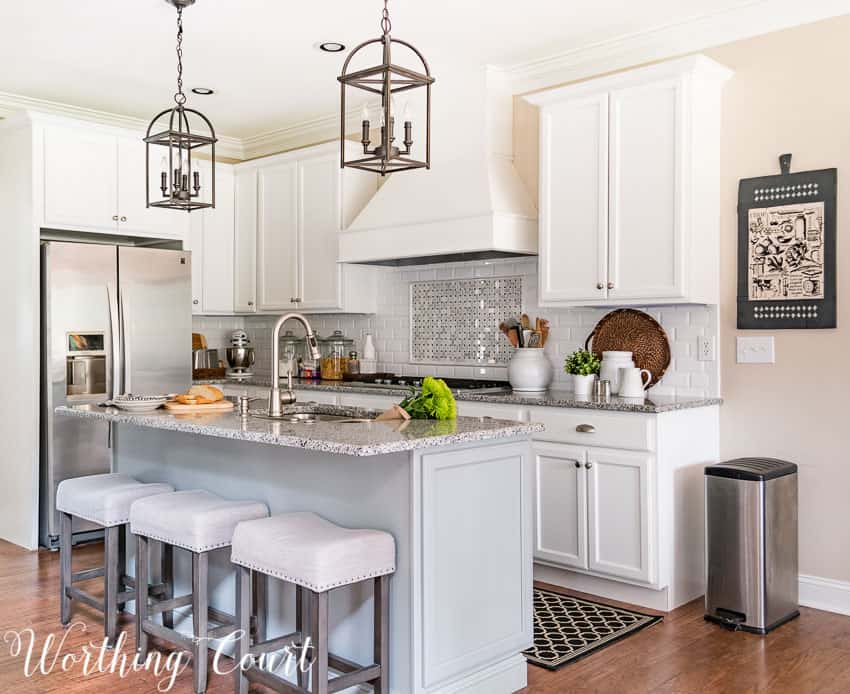 The one single thing in the entire kitchen remodel, that I wanted the most, was to have a large hood as a feature on one wall.  I didn’t want a dinky oven hood either.  Our hood measures 48″ wide.  For reference, the cooktop is 36″ wide.  It makes quite the statement.  😀 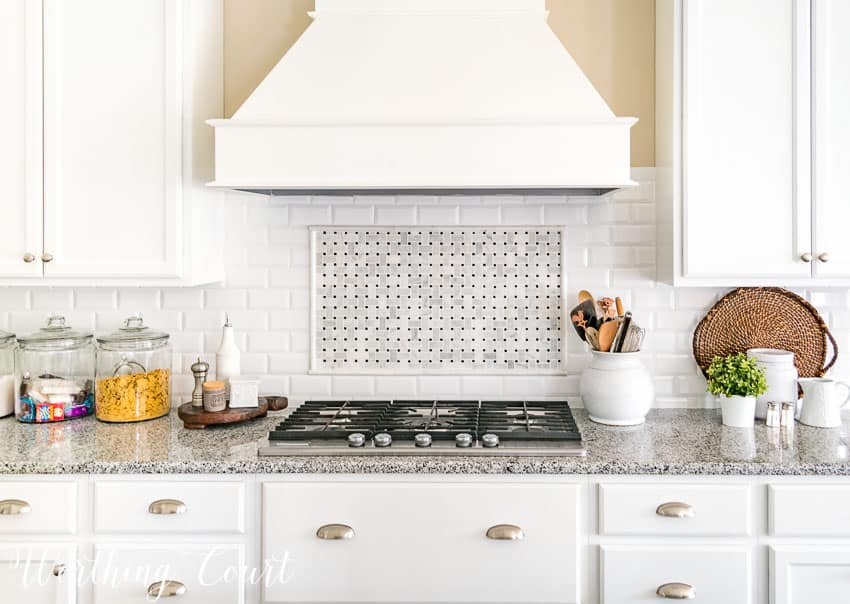 It’s usually the details that trip you up, right?  Well, I pretty much knew everything that I wanted in the kitchen, but when it came to the backsplash, I froze.  After bringing home a myriad of samples and visiting tons of local tile stores, I wound up using a simple, beveled edge, subway tile.  The decorative tile inset above the cooktop is a carrera marble mosaic framed with carrera pencil tile.  We found every bit of the tile at Home Depot. 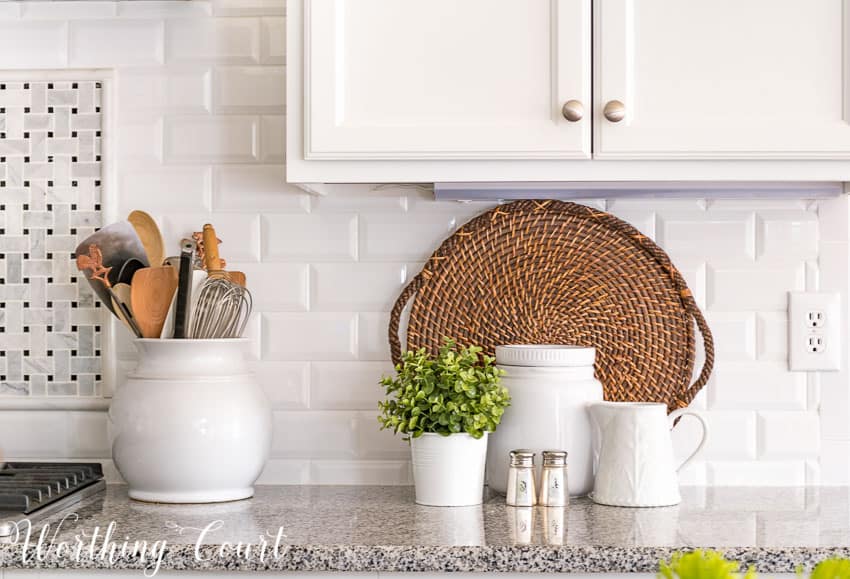 Instead of leaving the refrigerator in its original location, we moved it to the end of the kitchen.  Panels were added to each side of it to give it a built-in look. 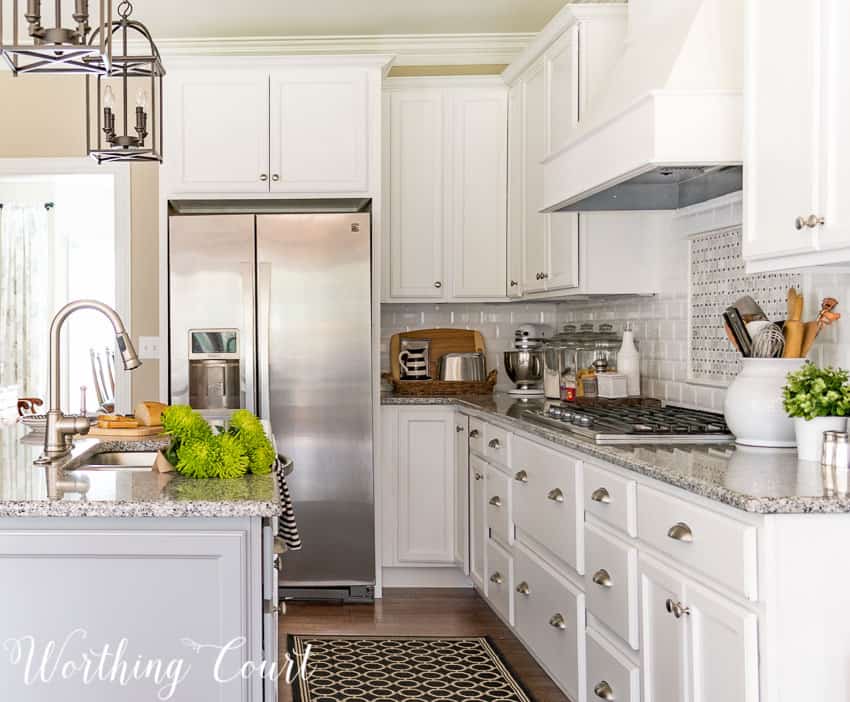 It turned out that the corner beside the fridge made a great little nook to tuck away our toaster and standing mixer.

Two wall ovens and the microwave were added to the opposite side of the kitchen, beside the pantry.  The only thing done to the kitchen pantry was to give it a very thorough cleaning. 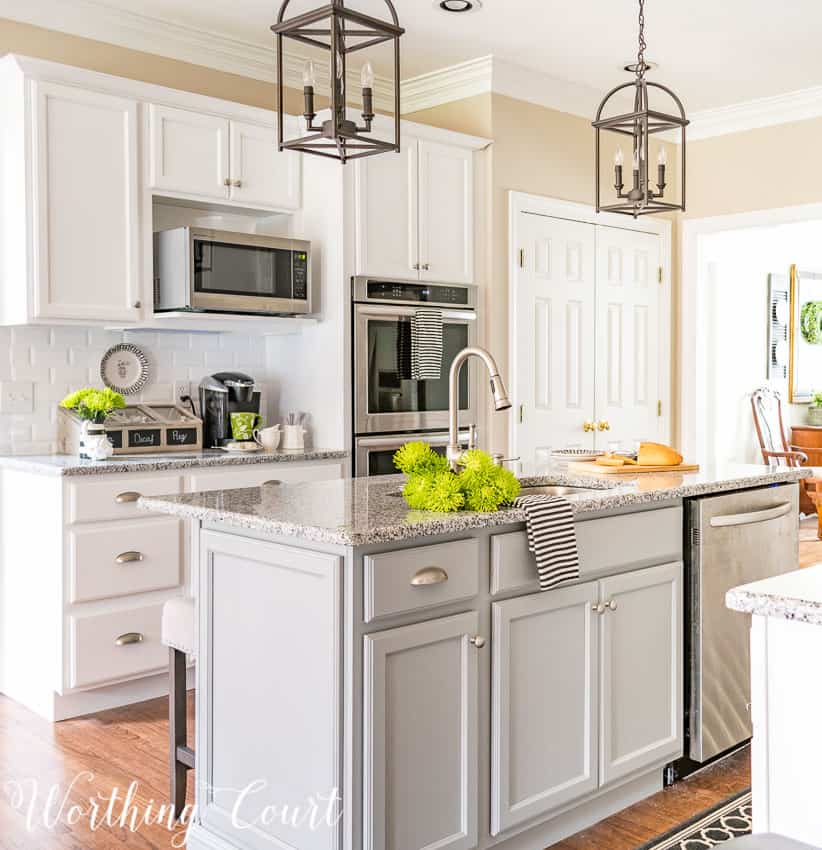 The counter beside the wall ovens is my coffee and hot beverage nook.

Many of our layout decisions were based on not only wanting to enlarge the island, but to provide counter seating as well. 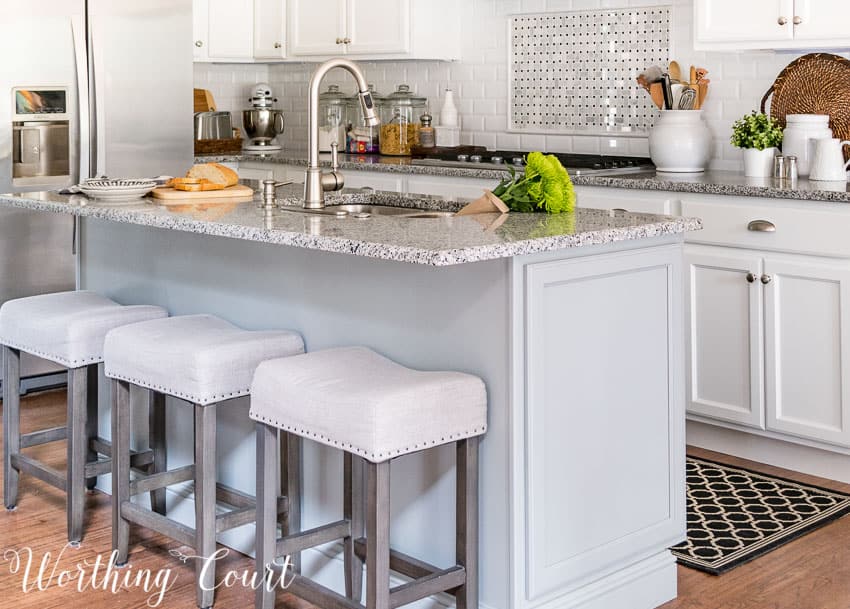 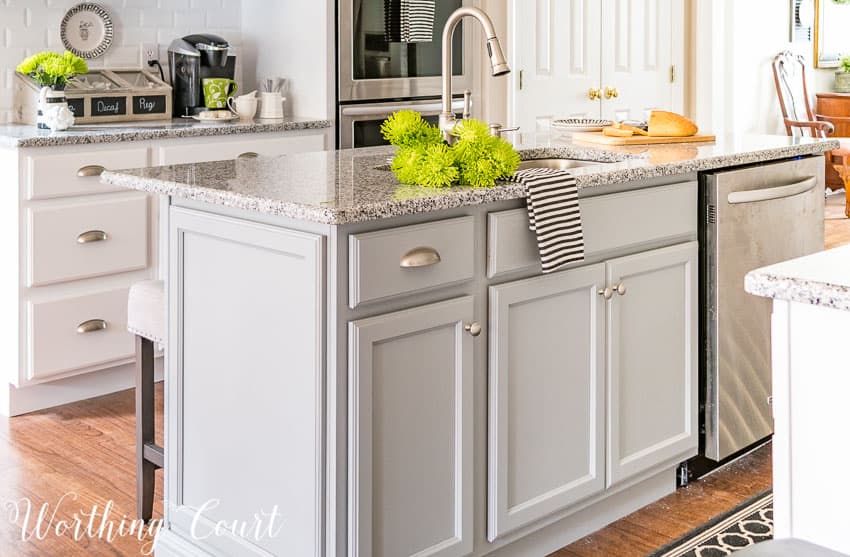 The one thing that I could not get in our new kitchen was a large window above the kitchen sink.  Boo. But in the end, I realized that it really doesn’t matter.  All I need to do is turn my head to the side to see out the windows of our breakfast area.  Our kitchen is a long room with the breakfast area located at the other end.  To give you some perspective, you can see a corner of the island counter in the foreground.  To see the before and after remodel of our breakfast area, click HERE. 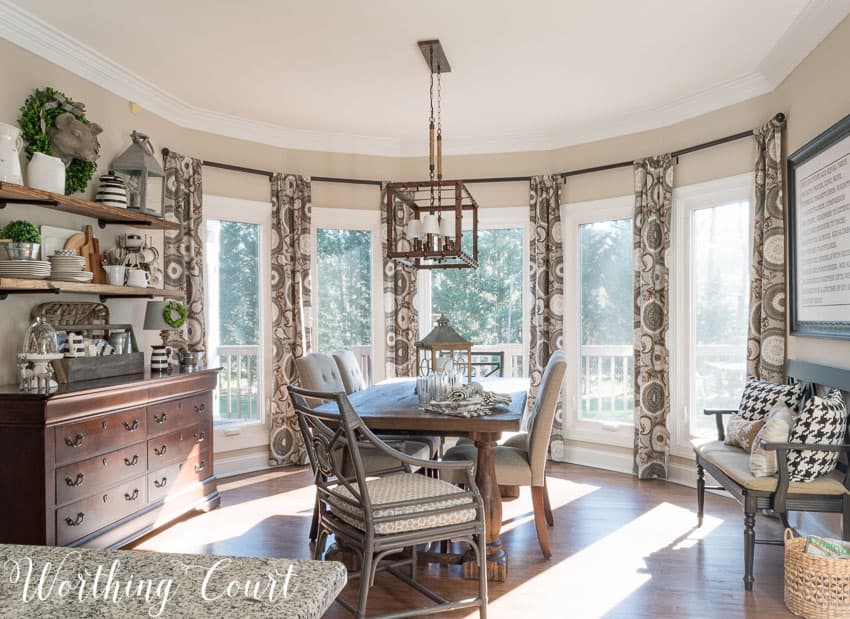 For two people who have zero experience in kitchen remodeling and design, I’m pretty proud of the end result!  It has turned out to be a very functional and easy kitchen to work in. 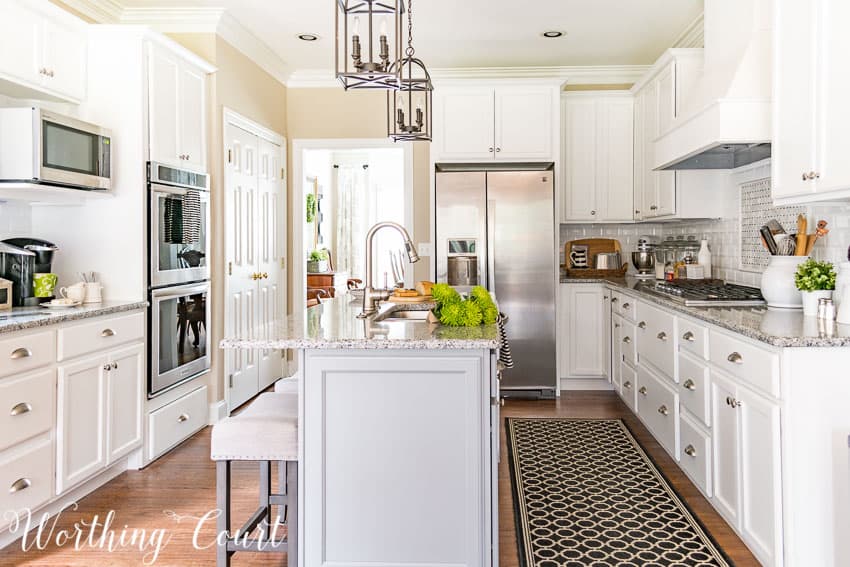 This post is already super long, so I’ll be back tomorrow with more details and why we made some of the decisions that we did – the good and the bad.

IF YOU’RE LOOKING FOR WHITE KITCHEN INSPIRATION, PIN IT FOR LATER!

Sharing at THESE great parties. 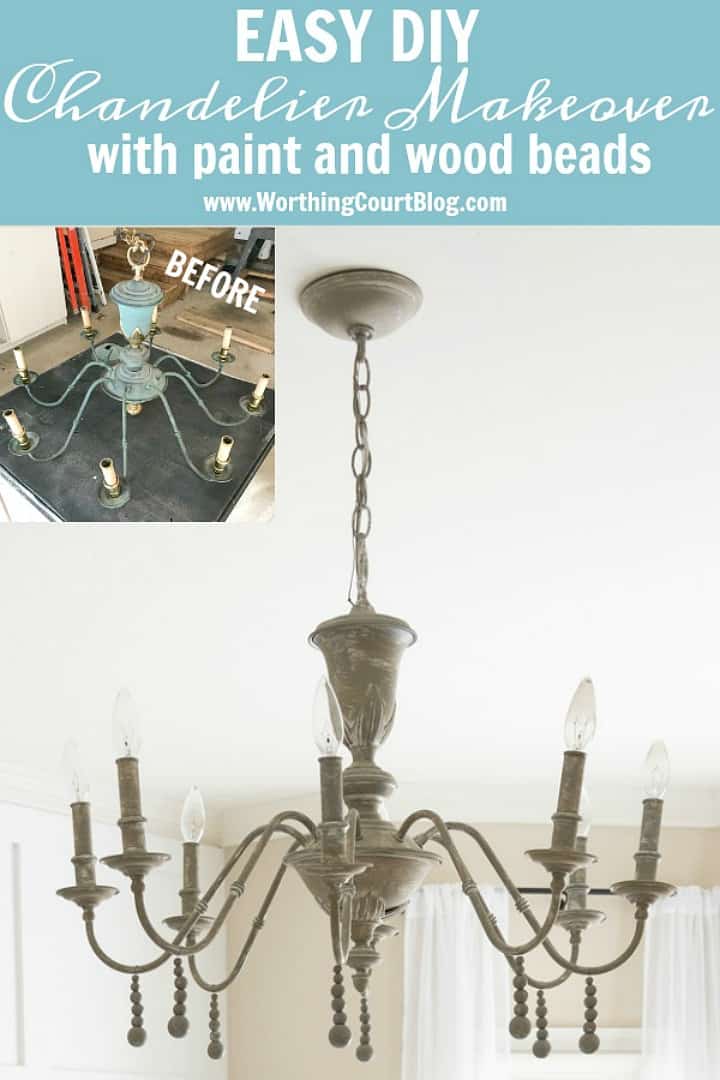 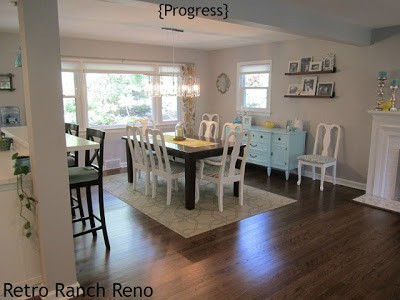 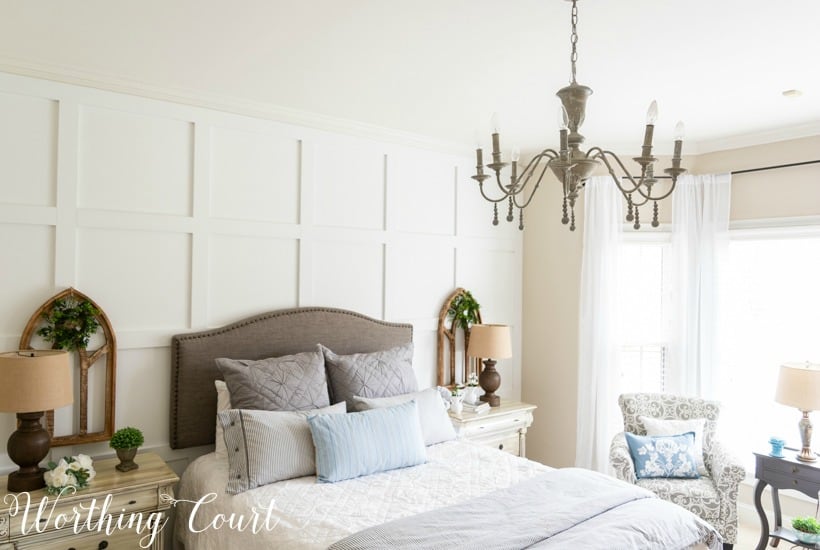